The Komfi Delta 52 laminating machine has been synonymous with professional lamination solutions in the printing industry for more than 20 years. With more than a thousand installations worldwide, it is a symbol of highly efficient and high-quality production. 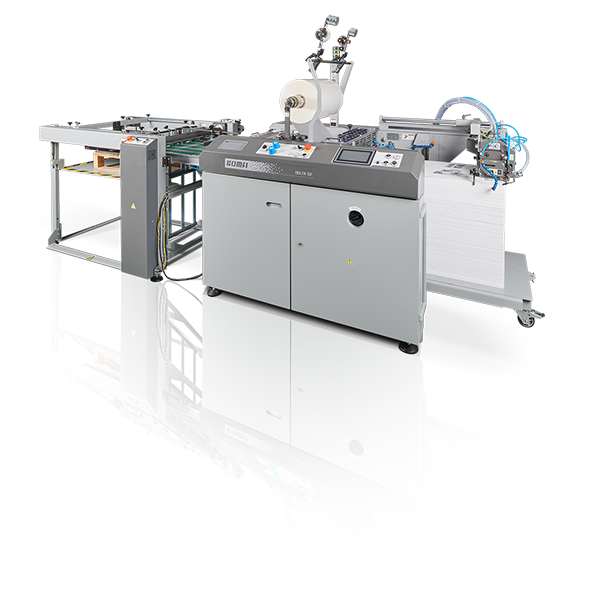 WHAT YOU WILL DEFINITELY APPRECIATE:

Pallet loader: The loading table slides down to the ground and allows easy loading of a pallet with a stack of paper. The maximum stack height of 85 cm (including the pallet) also contributes to the high productivity of the machine.

Powerful laminating unit: The large diameter of the laminating roller (140 mm) and the powerful pneumatic pressure system guarantee high-quality adhesion of printed paper even at a maximum speed of 35 m/min and maximum coverage.

Universal use: Delta 52 is not only a machine for processing large standard orders, where the emphasis is on productivity and work efficiency. It is a traditional laminating machine with a high degree of automation, but at the same time with the preserved possibility of fine manual adjustment, which allows laminating even polygraphic “nuts”. An experienced operator can thus process a much wider range of orders outside the guaranteed range of standard parameters.

WHY DO CUSTOMERS CHOOSE DELTA 52?

The Netherlands: The Simian printer started laminating about 10 years ago, when it laminated only occasionally on a small laminator. About 4 years ago, the amount of lamination was so large that the owner decided to buy a professional laminator. Due to the growing demand of customers for fast delivery of finished orders, was the reliability the main criterion. The Komfi laminator was a clear choice, especially thanks to several years of experience with the Komfi Fullmatic UV coating machine, which clearly passed the reliability test.

Switzerland: Edubook is a Swiss printer focused exclusively on digital printing. Most of the production consists of textbooks, the envelopes were previously varnished. Edubook started lamination 10 years ago based on specific customer requirements. At that time, they laminated only accasionally, but varnishing still prevailed. When it came to deciding to switch completely to lamination, Edubook focused on a powerful laminator for industrial processing, ease of use and productivity. After the introduction of lamination technology with the Komfi laminator, the volume of laminated envelopes increased from 30,000 to 600,000!

Czech Republic: Ottova tiskárna: Ottova tiskárna is a well-known Czech manufacturer of paper bags, in which is lamination one of the main criteria for the final product quality. In the past, they laminated on an Amiga 52 machine, but with the growing volume of orders, it was necessary to switch to a more productive variant. After previous experience, the Komfi machine was a clear choice and the Delta 52 was chosen as the most suitable model. A prototype of a new model was installed in Ottova tiskárna by mutual agreement, which was thoroughly tested as part of this excellent cooperation.

Switzerland: Formvil is a Swiss company which deals with print and packaging production. The first laminator bought in 1997, when it was a second-hand machine. Shortly afterwards, the owner of Formvil invested in a new facility. The Komfi laminator chose at the Drupa trade fair, where he focused on easy adjustment and compactness of the equipment. Delta 52 had these preconditions and won. Currently, Formvil already has a third Delta, which provides more automation and productivity, but at the same time the customer appreciates that the control principle remains equally intuitive on the new models.